Foreign countries on Twitter: EU and USA get the greatest attention, Green Party tweets the most

Swiss political parties pay only limited attention to foreign countries on Twitter. Yet the differences in their points of interest are clearly identifiable: while the SVP has dedicated two thirds of its posts concerning foreign countries to the European Union, the EVP has focused mainly on the situation in Syria. The European Union and the United States receive by far the most coverage. Politicians tweet mainly about various tax and trade agreements with Switzerland.

One would not expect Eritrea to get much attention by Swiss political parties on Twitter. Yet there were more tweets on the small East African nation than on the United Kingdom or Austria – the sixth and eighth largest export partners of Switzerland. The reason behind the unwarranted attention to Eritrea was an “innocent” post by the SVP party in the summer of 2015, which sparked further discussion. “‘Please, one ticket to Eritrea – simply!’ Editorial by SVP-National Councillor Sylvia Flückiger,” the SVP tweeted. The majority of tweets are however more serious and connected to actual events and Swiss interests.

As has been shown by the analysis of posts published on official Twitter accounts of Swiss political parties, parties focus mainly on domestic issues. Out of more than 16 thousand tweets published by them, just 371 referred to a foreign country in one of the official Swiss languages or in English. Of those which concerned foreign states, one third focused on the European Union, followed by the United States and Germany. The “top 10” countries interestingly included also Syria and Croatia (Eritrea was 11th). Syria due to the war and Croatia after becoming the newest member of the EU.

Popularity of countries with Swiss political parties on Twitter:

(Frequency of mentions. Based on Tweets published by Swiss political parties, which directly refer to a given country in English, German, French or Italian. The darker the color, the more frequently mentioned the country is. Created with GoogleCharts.)

The most active party is the Green Party, which has published 116 posts concerning foreign states. The Greens tweet the most frequently about the EU, USA and Germany. With respect to the content, their Tweets are more friendly towards foreign countries than Tweets of other political parties. Some of them are even written in English, which is unusual among Swiss political parties. The vast majority of Tweets are published in German, a very small part in French or English and just a few posts are written in Italian.

EVP and BDP are on the other hand the least active parties tweeting about foreign countries, when looking at absolute numbers. EVP devoted the most amount of Tweets to war and refugee crises in Syria, followed by topics concerning the EU and Iraq. With consideration of the total amount of published Tweets, of all Swiss political parties SVP devoted the smallest proportion of Tweets to the situation abroad. Their posts focused mainly on the European Union and were rather critical.

(Frequency and proportion of mentions. Based on Tweets published by Swiss political parties, which directly refer to a given country in English, German, French or Italian. Created with GoogleCharts.)

Tax agreements but also the first parliamentary chess tournament
When tweeting about foreign countries, politicians usually keep the Swiss aspect in mind. Thereby various tax and trade agreements of various countries with Switzerland receive much of their attention on Twitter. They tweet for example about trade agreements with the European Union and China and about tax relationship with the USA and Germany.

The European Union is most frequently mentioned on Twitter. As it can be seen in the Wordcloud below, the main actors mentioned in relation to the EU are Switzerland itself and the Swiss Federal Council (Bundesrat). From the topics, for example the new bilateral agreement Switzerland-EU, mass immigration initiative in 2015 and voting about the second Gotthard tube all received a large amount of attention.

But the posts are not always about major political and economic topics. CVP party was for example tweeting about the first parliamentary Swiss-Russian chess tournament and FDP about the prices of books in Germany. “What do you think: How many times cheaper/more expensive are the books in Germany than in Switzerland?,” they asked. The post about Eddy Merchx, who won his first Tour de France without wearing a helmet (in 1969), earned the Green Party more retweets than a post about a nuclear accident in France.

In general, political parties often share articles or TV broadcasts, which cover them. This is also the case for Tweets about foreign countries. The vast majority of published posts are not simple text Tweet, but also link to some other type of content – an article, photo or video.

Issues most frequently mentioned on Twitter in relation to the EU 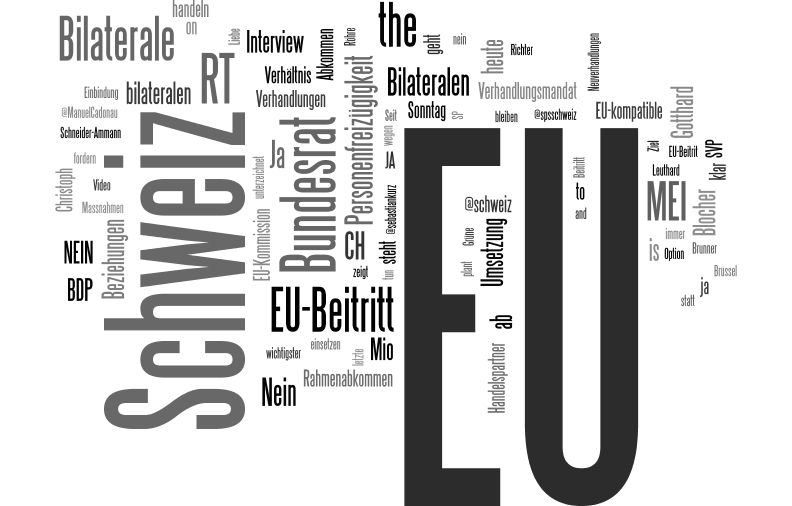 (Frequency of words concerning the European Union. Common German words removed. Based on Tweets published by all Swiss political parties, which directly refer to the EU in English, German, French or Italian. Created with Wordle.)

R-code used for data gathering. Google spreadsheets used for data visualization. Tweets were collected with respect to Swiss political parties. Country names were searched in English, German, French and Italian. Some old Tweets could not be gathered due to Twitter limits, the vast majority of Tweets published by parties was however collected.